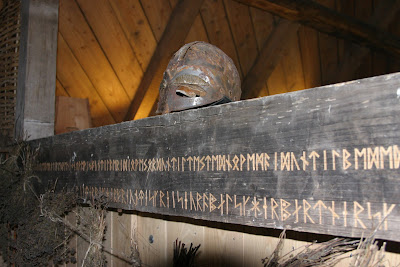 We think of Greenland as an inhospitable place – a land of ice and rock. The only inhabitants are the Inuit (their lifestyle finely tuned to their environment), men who plunder the land for valuable resources such as rare minerals, and explorers and scientists braving those icy wastes for the greater good.

But once there were settlements and farms. And these settlers were Vikings.

Greenland was discovered by Eric the Red back in the 10th century. He named the place Greenland to make it sound lush and encouraged his countrymen to move there and settle. There were a number of settlements, all located in the South.

It seems strange now, to think that anyone could survive there, let alone make a living from farming. But this was a time when the climate was warmer than it is now. This was known as the Medieval Warm Period. In Britain vines flourished, and here in Greenland farming was feasible. The settlements thrived and the population grew to 3,000 - 5,000 people.

But it was not to last.

The Medieval Warm Period gave way to the Little Ice Age. In Britain the Thames froze solid. Here in Greenland the crops failed and the trade routes were cut off by ice. In the 14th century the colony went into decline. The last written record is a wedding solemnised in 1408, but after that – nothing.

And so the Greenland Vikings became victims of climate change.
Posted by Kate at 10:00