One word was all it took.

One word in a technical report I was reading at work. The sun was shining outside my office window and my thoughts kept drifting to my children who were spending the day out sailing in the bay. I had to keep dragging my attention back to what I was supposed to be reading.

A concept I hadn’t come across before. It leaped out from the page and struck me between the eyes, and I sat for long moments staring at it.

And as I stared a character began to form. She took shape and substance and started to whisper to me, her voice getting louder, more urgent. I think I’ll call her Lisa. And Lisa has a story to tell.

One word and a whole new world grew up around me.

One day I’ll tell you what that word was.
Posted by Kate at 08:30 3 comments: Links to this post

Email ThisBlogThis!Share to TwitterShare to FacebookShare to Pinterest
Labels: Lisa

Of Science Fiction and Science

Science permeates nearly all of my writing. Most of my published short stories to date have been Science Fiction. Even my less SciFi work usually includes scientific themes. You could put this down to the fact that I work in a scientific field (oceanography). But you’d be wrong.

When I was eleven I read my first Asimov story. It was Nightfall, and it changed my reading habits for ever.

The ideas in the Science Fiction I read inspired me, stretched my imagination, made me question the world around me. I moved on to Wyndham and Hoyle, to Bradbury and Vonnegut, to Gibson, MacLeod and Baxter.

Don’t get me wrong – I read across lots of genres. But it was Science Fiction that changed my life. You see, somewhere between Wyndham and Holye I decided that I was going to become a scientist.

I can’t help noticing that it isn’t unusual for SciFi writers to have a background in science. In fact both Asimov and Hoyle were very eminent in their respective fields.

I wonder which came first for them?
Posted by Kate at 08:30 4 comments: Links to this post

Email ThisBlogThis!Share to TwitterShare to FacebookShare to Pinterest
Labels: Science

A small boy ventures alone into a deep dark cave... 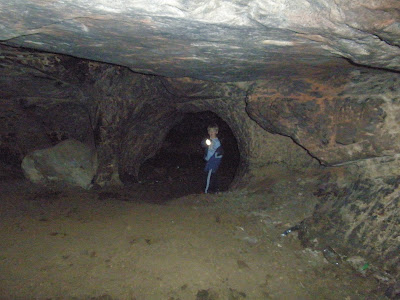 Watch out for the eyes! 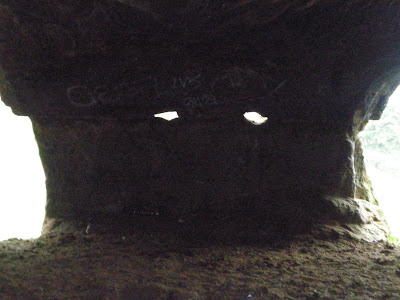 I don’t know about you but I am hopeless as spotting typos. I dare say there are a fair few on this blog. Occasionally people are good enough to point them out and then I can correct them, but I’m sure there are plenty that go unspotted!

Sometimes typos can be quite amusing – not to mention completely changing the meaning of what you are trying to say.

A while back, while a group of my characters romped along in their adventure, someone kindly pointed out that the moment I'd turned my back my MC was peeing out of the helicopter. (He was meant to be peering.)

Honestly, if you don’t keep a close eye on them they get up to all sorts of mischief!

So here I am, trawling through my MS and trying to spot all the typos. Sometimes I can read a page ten times and still read what I meant to say instead of seeing what’s really there! Changing the font size and printing it out helps. But I bet I won’t get all of them – no matter how hard I try.

I can assure you though – nobody’s peeing anywhere they shouldn’t be!
Posted by Kate at 08:00 11 comments: Links to this post

Email ThisBlogThis!Share to TwitterShare to FacebookShare to Pinterest
Labels: WRRW

How I Got My Agent: Guest Post by James Dawson

Please welcome James Dawson who has stopped by with another agent success story.

It was only at a writer's convention last year that I realised how lucky I am to have an agent representing my book. Out of 250 delegates, I was only one attached to an agency and was treated as a rare and beautiful specimen, not unlike an endangered species at a conservation zoo. Some of the people I spoke to had been going through the 'write-submit-reject' cycle for YEARS. While I was there to hob-nob and learn a bit about the industry, literally everyone else was there for a chance to mingle with the two agents present, with a view to being 'discovered'. It was a blast of icy water – I wouldn't say finding my agent was easy, but I now see that I never, ever had it difficult.

A number of delegates asked how I landed my agent, so here it is – maybe there are lessons to be learned within my (quite boring) story. I'll start at the beginning. I started writing Hollow Pike in early 2009, with all sorts of motivations in mind. By the summer, very naïve to how these things work, I decided to submit it to an agency. I did a bit of research and found the name of an agent who represents one of my favourite children's/YA authors. Following their submission guidelines carefully, off the sample chapters went in a crisp, white envelope; full to the brim with hopes and dreams.

You can only imagine the joy when just two weeks later I had a request for the entire manuscript. It was a simple, polite, poker-face email: “We enjoyed the chapters you sent. We would be interested in reading the full manuscript.” While this was brilliant, there was one small snag. The book wasn't even nearly finished. Maybe just over half way done. I was suffering from what the wise publishing guru Lynn Price terms “premature submitulation”. I think the title speaks for itself. This is such a rookie error – I look back and could just die of shame. I did what I could. I polished up the chapters, had a couple of people do a line read and sent her what I had with a pitiful letter and an outline of the remaining chapters.

It's true what they say, you can't polish a turd, you can only roll it in glitter. Needless to say, I received a polite form rejection, explaining that while my manuscript had clear “quality”, they wouldn't be taking it any further. I can't say I was surprised, but it hurt like Hell. The first rejection is the worst.

But the request to see the full manuscript filled me with fire. It couldn't suck. They wouldn't have asked to see the whole thing if it stank. It gave me the drive to keep going. I gave myself a new target – finish the book. It stopped being about the dream of being published and became a personal quest to complete a project (something which I've struggled with my whole life). The novel was finished in October 2009 and I started rewriting and polishing at once, with help from the lovely people at Litopia.

The submissions that followed were much less successful. I think the lesson learned is choose your targets carefully. Looking at my list, I'm now unsure that the agencies I sent samples to would have been the best homes for my work. I sent partial manuscripts out in blocks of three, so I could keep track of where it was and who I was dealing with. The first six came back as rejections (well mostly, it took one six months to reject it, by which time I was with my current agent!). However I entered discussions with another agent who seemed keen, and although these talks came to nothing, it once again gave me enough sustenance to keep going.

The agency I'm now represented by was part of my third attempt in April 2010. Initially uncertain of whether to submit (because their client list is predominantly literary fiction, and while I am many things, literary is not one of them), I saw the magic words...building a new list of children's and teenage fiction. Lesson two, then – read the small print. My agent was actively building her list. The agent mentioned above rejected me because she had too many authors to manage already, simple as that.

As I had learned from the first brush, things can happen lightning fast. The day after I sent my agent the first three chapters, she asked to see the whole thing, and this time it was ready. But as with any story worth telling, there has to be some drama, and this was no different. Somehow, possibly because of an ancient curse, when attaching the files via email, the wrong version (complete with clichéd, Inception style “or is it..?” ending) was sent.

It took 24 hours to realise I'd sent the wrong version, by which time she was already reading it. I quickly sent the right version with a grovelling email and got drunk. Three days later, I got my reply... “I really loved HOLLOW PIKE and would be keen on discussing it further with a view to offering you representation.” I was at my day job and promptly cried on a co-worker.

A phone call later and that was that. Done and dusted. My letter of agreement arrived about a week later. That was just the beginning – some other time I'd like to blog about the work my agent has done for me over the last six months, because it's been immense and I'm very grateful. Writing this blog entry has left me a bit emotional (possibly because I had two glasses of wine earlier), and again, feeling lucky. Talent counts, but if Jo hadn't been accepting new submissions when she was, I might have been waiting years.

Final lesson – don't try to predict trends in the market. My manuscript was originally a lot more “supernatural” than the finished product will be, I was writing it in the midst of Twilight fever, and thought that was what agents and publishers wanted to read. Wrong. The publishing world is way ahead of writers, trying to set new trends. Hollow Pike is richer now for losing a cast of characters with superhuman powers – darker and edgier, much more in keeping with my personal taste. Go with what inspires you, be original, write as well as you can, steady yourself for inevitable months of rejection and never give up.

James Dawson is the author of HOLLOW PIKE, released 2nd Feb 2012 from Indigo/Orion. You can find out more about James over on his website.
Posted by Kate at 12:00 5 comments: Links to this post