End at the End

So much emphasis is put on getting the opening right, but a good ending is also important.

Even so, as a reader, I get very frustrated when a story or novel doesn’t end well. Some of the types of ending that annoy me most are as follows.

The story runs on – often happens in short stories where the writer writes on beyond the story’s natural end. I’ve done this myself often enough :-)

The story fizzles out – almost as if the writer got bored and didn’t really know how to end it. I get really annoyed with these.

Loose ends are left hanging – OK if they are part of the set up for a series or sequel, but really annoying if they are just the writer being sloppy.

So what makes for a good ending? Well for me the best ones are those that resonate and haunt me for the rest of the day. When you get that feeling that you don’t want to pick up another book just yet. That’s when I’ve read a truly satisfying ending.

Of course, it’s one thing to spot these, quite another thing to pull it off myself. So did I manage it? I’ll tell you when I get there!
Posted by Kate at 20:31 No comments:

Plotting is something I’ve been thinking about a lot recently. It’s one of the hardest things to get right, and the hardest thing to get good feedback on, simply because it would involve getting someone to read the entire novel, which is a lot to ask of anyone.

Anyway, after trawling through writing books and the internet I thought I would post some of my thoughts on the subject here.

Now it seems that most stories will follow the same general plot principle, which I’ve tried to visualise in my little graph below. 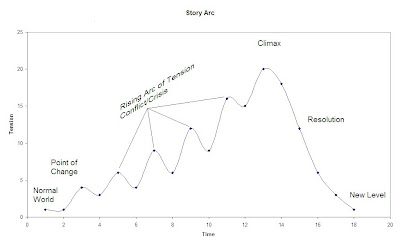 So how does this compare with all the other structures described out there? Well I think they are one and the same and in order to illustrate this I’ve taken 4 popular ones: The Heroes, journey, the 3 act structure, the 7 basic blot beats and the 8 point arc, and mapped them across onto my arc of tension graph. 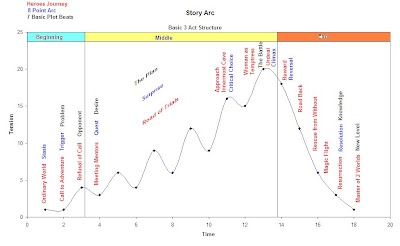 Apologies if it’s not that easy to read but hopefully you can get the gist. It seems to me that they map across rather well.

So how does this apply to my own work?

Well as a little experiment I thought I would try to map the tension arc for my children’s book. Estimates for tension in each chapter are of course based on gut feeling. Here it is. 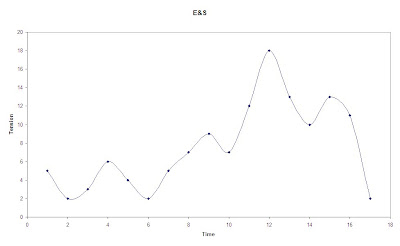 Begin at the Beginning

This sounds straightforward enough, but isn’t always the case. If fact, sometimes it can be quite hard to identify where exactly a story should start.

The simple answer we’re told is that a story starts “in the character’s normal world at the point of change.”

But is it always easy to identify that point of change?

Now I’ve just completely re-written the opening chapters of my children’s book. Coming back to it after a break it was clear that, although it started at a point of change, the story itself didn’t really get going until halfway through Chapter 2. In fact, this second point of change was much bigger, incorporated the first point of change, which was really quite minor, and also means that the story now opens with action.

So were those earlier pages a waste of time? Of course not – I needed to write them to get to know my characters, get a feeling of the period and setting, and truly absorb myself, as a writer, in the world I had created – in fact, in my MCs “normal world”.

I see this so often when I’m reading through my own, as well as other people’s work – large chunks of exposition being particularly common in Science Fiction. Yes, this sometimes does need to be written, if only to help the author get his/her head into the world, but the hard thing to learn is that it doesn’t need to be kept.

Find where the story really starts, highlight everything that comes before, hit delete and go from there…
Posted by Kate at 19:28 1 comment:

Last night’s prose café at the Octagon Theatre was a talk by local artist Kate Lynch. Her paintings form a unique record of the Willow and basket making industries of the Somerset Levels and the book she has produced, Willow, which includes comments by the people in her pictures about their work, forms a unique rural documentary on a way of life that had its heyday in the 19th Century, but is now much reduced.

It was a fascinating talk for instance I never knew that during the war basket making was a reserved occupation, or that being buried in a willow coffin had become so popular. Next time I am up in the wetlands I will be on the lookout for the willow beds.

For more about Kate and her work check out her website:
Here. Kate Lynch is just to the right of the sheep, sheep farming in the Somerset Levels being her next project.
Posted by Kate at 14:39 No comments:

Well not much longer by the looks of things – just had an e-mail from the editor and he’s hoping to start shipping the contributor copies in about a week. So, fingers crossed, I could have this in my sweaty little mitts sometime this month. I’m really looking forward to this one – it’s a really interesting project and I can’t wait to see what the other authors have done with the theme: (a story set in the ruins pictured with the woman as protagonist). 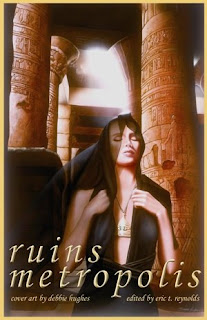 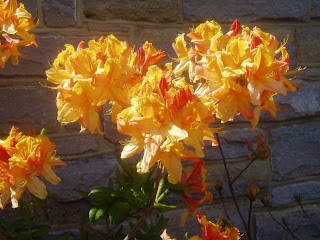 The first of May and the azalea my father grew from seed just before he died has burst into flower for the first time, as if to welcome Mayday. Whenever I see it I think of him. So here it is, in tribute. A published author himself, he was the man who inspired me to write.
Posted by Kate at 15:08 No comments: