Relics of a Darker Age

A fine Sunday afternoon and everyone is out enjoying the sunshine. A hanglider hugs the cliffs whilst dog walkers throw sticks into the surf on the beach below. Jetskis and windsurfers skim the waves and down at the Smugglers Inn people soak up the sunshine and sip their beer.

Today the bay is a wide playground, but here and there we come across reminders of a darker time – a time when the threat of invasion was very real, and the coastline was fortified. A time of war. 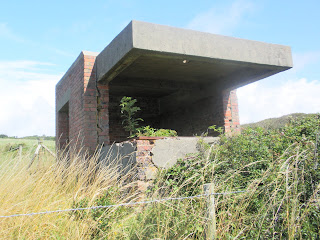 As you walk along the coastpath, you could easily pass these by. The brickwork still stands, overgrown with brambles and nettles; machine gun emplacements looking out across the bay, reminding us that things here were once very different.

But even today not everything is as it seems, for there a four large ships tied up in the shelter of the bay. There’s a storm out there somewhere. But me? I’m eating ice-cream and playing with my children in the sand.

Email ThisBlogThis!Share to TwitterShare to FacebookShare to Pinterest
Labels: general, the sea, weather 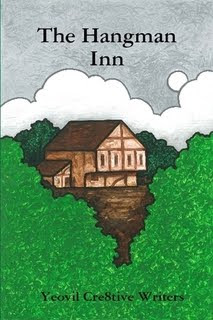 The Hangman Inn is an anthology of poetry and prose produced by the Yeovil Cre8tive Writers with yours truly here has been busy editing. It’s been hard work but I have to admit I’m very pleased with the result. We have such a diverse and talented group and it showcases the broad spectrum of writing styles and genres that we cover. The cover art was kindly produced for us by the very talented Wayne Chisnell.

The theme of the anthology is the Pub, The Hangman Inn, which is situated on a lonely country road to the south of Yeovil and the stories had to feature the pub in some way, and any point during its history. I even produced a photograph of said pub for inspiration. 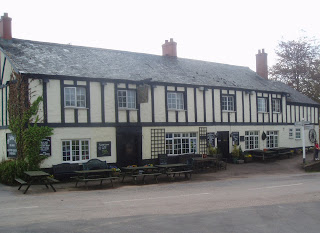 What made me laugh though was when several members of the group suggested that maybe we could have our Christmas do there. Another suggested that the landlord might like a copy, and another spent ages searching for it on a map. They all looked so disappointed when I broke it to them that The Hangman Inn doesn’t really exist. (well I’m sure there’s a Hangman Inn somewhere – there’s bound to be!). But I guess it had become real for us.

The proof copy has finally arrived and it’s looking good. I’ll be ordering up the rest of them so that we can give it a launch in November at the next Prose Café, and we can all get copies for Christmas!
Anyway, I’m afraid you won’t be able to buy a copy unless you come along to one of our Prose Café’s at the Octagon Theatre in Yeovil. Sorry.
Posted by Kate at 20:13 No comments:

Why We Should Plot

Plotting isn’t for everyone. I know some writers who like to sit down with no idea where a story is going and see what evolves as they write. When I first started I did this. But I’ve come to the conclusion that I really need to plot.

But the same applies to novels. At the very least I need to know how it is going to end, but with a much bigger canvas to work with, I’m finding it more important to know what the twists and turns along the way are going to be. I guess plotting has never been my strongest point. But this is something I really need to crack.

For, even though I thought I’d done enough plotting for the WIP before I started, I seem to have come unstuck. One of my characters, who I’d clearly not thought carefully enough about, managed to involve herself in the story for far longer than she was needed, and now I’ve had to go back and write her out of the last five chapters!!

I think I need to do a bit more work on the plot for this one before I go any further!!

But for now it can sit and gestate at the back of my mind – I’m up to my eyeballs in the ‘novel-formerly-known-as-Myth-Making’ rewrite – and I need to make sure the plot is solid in this one too!
Posted by Kate at 18:56 No comments:

And two steps back. At least, that’s what it feels like. Although in reality it’s actually all forwards.

What am I talking about you ask? The answer is that elusive gold-dust of Agent feedback.

I’ve posted about my Agent hunt before, and I know I’ve been quiet on the subject – well that was because I was busy rewriting, and then resubmitting, and now…. More Agent feedback, and it’s back to the drawing board.

I was just about to crack on with the WIP, but that will have to wait. There’s another rewrite to be done for this one, and some major changes to be made.
Posted by Kate at 18:22 5 comments: