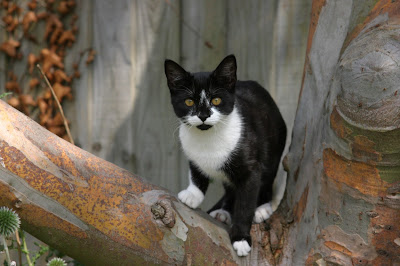 Okay, so this is a picture of a very small cat, and that is because I have never been fortunate enough to spot one of the famous Dorset Big cats. But there are plenty of people who claim they have.

In fact there was a sighting only a couple of weeks ago where one was spotted in a field near Dorchester by a passing lorry driver.

Dorset is by no means the only place where big cats have been seen – we’ve all heard of the Best of Bodmin – and there have been sightings in many other places too.

Now it’s very easy to dismiss these sightings as mis-observation, especially after the Essex Lion turned out to be a rather large tomcat. But the fact remains that many people have seen something out of the ordinary – so unusual in fact that they have risked ridicule in order to report it.

When we visited Exmoor Zoo we saw black panthers and the keeper spoke to us about the big cat observations on the moor. There was no doubt in his mind that big cats were living and breeding wild in the UK. Where they came from though is the question.

There is one line of thought that when the Dangerous Wild Animals Act came into force in 1976 people who did not wish to hand their pets in, or have them destroyed, let them loose. And these were the ancestors of the big cats that are seen today.

There is another line of thought that they are creatures from the spirit world that pass across occasionally into ours; the rationale behind this theory being that the cats described by witnesses are so variable in appearance.

This in itself is interesting. Maybe there is more than one species of big cat living wild in our countryside, or maybe it’s down to the way we perceive and our minds interpret the unusual. And these witnesses certainly saw something unusual.

I find this whole thing fascinating. It seems unfeasible that a whole sub species of big cat could be living among us and yet be unknown. But at the same time it would be wrong to dismiss what perfectly rational people believe they have seen.

Panthers or demons? What do you think?
Posted by K M Kelly at 10:00

K M Kelly
Welcome to my blog. I am a UK based author with a passion for the sea. My debut thriller, The Sleepers, will be published in April 2022 by Bloodhound Books.

Show 10 Show All
All photographs and content on this blog are (c) Kate Kelly unless otherwise stated. If you wish to reproduce any please let me know and link back to this blog.