My Take on Ruins Metropolis

Having finally finished reading all the stories in Ruins Metropolis I thought I might as well post my thoughts on this superb anthology from Hadley Rille Books.

The theme of the anthology was for all the stories to be based on the cover art by Debbie Hughes, and the variety of the stories produced is stunning. They range from fantasy such as Sumari’s Solitude by Alycia C Cooke which opens the collection, to science fiction stories like Veilsight by Camille Alexa.

There are stories set in the ancient world at the time of the Pharaohs for example A haunting in Gisa by Brenta Blevins. Mrs Kelly’s Ghosts by Anna D Allen in which Mr’s Kelly’s archaeological discovery has a personal resonance for her is set during the great age of Egyptian discovery. There are stories set in the present such as Amulet by Jacqueline Seewald, and the far future like The Tomb of Setankan by Sarah Wagner in which a dig on a distant world, aiming to prove a link with the Ancient Egyptians turns up something far more telling. There are stories that move across time like The City of the Dead by Barton Paul Levenson, or are set on distant worlds like When Love Dies by Jonathan Shipley.

A number of the stories are set in Egypt, but we also have stories set during some of the world’s other great civilisations. Karrying Keptara by RF Long is a beautifully written piece that really resonates, set during the destruction of the Minoan Civilisation, and Dancing on the Corpse of the World by Jude Marie Green is a powerfully evocative piece about the Mayans.

All these stories are superb, beautifully written and thoroughly gripping. Some others that I feel deserve a mention are: The Memory by Meg Swanton, In search of Camanac by C L Holland, Burning Stone by Stephen Graham King and End by Ahmed A Khan.

But I think my personal favourite story of the anthology is Children of the City by Lyn McConchie – a futuristic story of a group of children eking out an existence in the ruins of an ancient city, and the mysterious storyteller who appears as something different to everyone who listens to her tales, and yet turns out to be something else all together.

So all in all, if you are looking for a collection of really good stories to read then can I strongly recommend Ruins Metropolis – and I’m not just saying this because it contains my own story, In the Precinct of Amun-Re. I’ve really enjoyed reading it and I’m proud to be in such good company.

And check out the Hadley Rille Books website for some of their other excellent anthologies.
Posted by Kate at 16:37 4 comments: Links to this post

There's something odd about the people in this town... 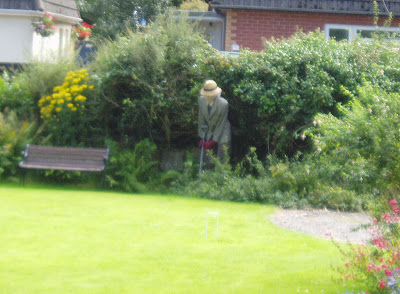 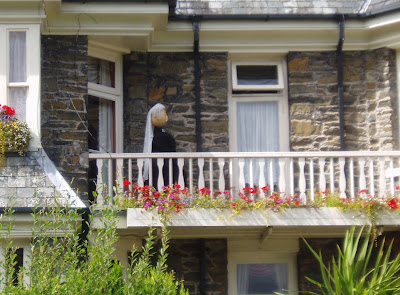 And on closer inspection appear to be scarecrows... 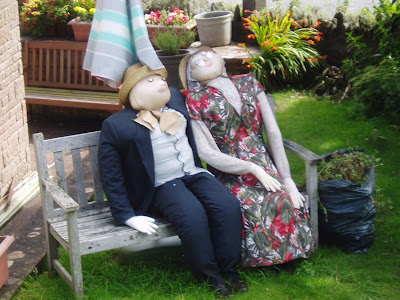 Posted by Kate at 16:28 No comments: Links to this post

The Ghosts of Bodmin Jail

One rainy morning whilst camping we took refuge in Bodmin Jail to see what strange things people were executed for a hundred years ago – but stranger still was the man we met who told us about the ghosts. He was standing by a series of blurry photographs and told us that if we looked hard enough we could make out the images of the spirits that haunt this prison. Well if I screwed up my eyes and turned my head on one side I think I could make out the shadowy shapes of the figures he claimed to commune with.

But as it is natural for the human brain to see shapes in random patterns I’m really not convinced. In fact I reckon I can make my own Bodmin Jail ghost, so here’s part of a photograph that I took while I was there. 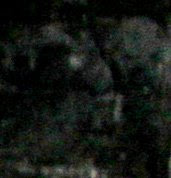 I’ve enhanced the contrast but no more. In fact I think it’s a better shadowy ghost image that the ones he had on show – and I can just make out the shadowy shape of some sort of beast – OMG! I think it’s the Beast of Bodmin!

Results of 'Return to Luna'

The 'Return to Luna' contest run jointly by Hadley Rille Books and the National Space Society has announced it's results - here - and I'm pleased to report that my Story 'Moondust' recieved an Honorable Mention.

And check out the Hadley Rille Books website for their latest call for submissions - a new anthology called Footprints, also with a lunar theme:

Long after our species and all its works have turned to dust, the moon landing sites will still show evidence of our time here on Earth. Imagine future explorers from among the stars interpreting that. The astronauts’ footprints should last longer than the fossils in the Olduvai Gorge have.

The story I already have that fits the theme is far too short, but I think I've another idea brewing. :-)
Posted by Kate at 10:42 2 comments: Links to this post