Last nights Prose Café at the Octagon Theatre in Yeovil was a talk by watercolour artist Moish Sokal. Here he is discussing one of his paintings with Liz. 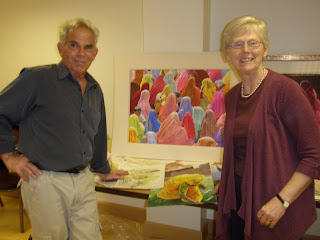 His paintings are quite stunning, but what really interested me was the way his craft had developed. He showed us examples of his early work (which looked excellent to my untrained eye) and then described some of the different things he had tried. But what was so interesting was the way that each of these phases in his painting life went on to contribute to the paintings he is producing today.

In a way this is analogous to the way we writers develop our craft. We may experiment with something new, and then move on, but what we have learned all contributes to our craft.

And of course it never stops. What will Moish be painting in ten years time? What will I be writing?

Anyway, Moish has an exhibition of his art opening on the First of June so if you are in the Somerset area it will be well worth a visit. There are details on Miosh’s website here. I will certainly be going along!
Posted by Kate at 09:21 No comments:

It’s May, and well dressing time. 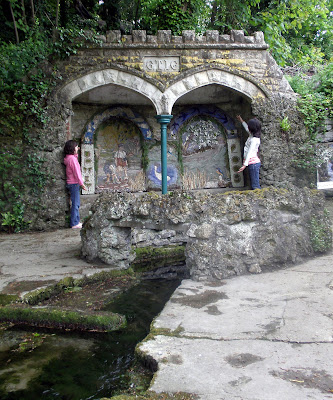 The image is made up purely of natural things, leaves and twigs, stones, beans and petals, pressed into wet clay, mounted on a wooden frame. This image has faded a bit now, but should last for the rest of the month. 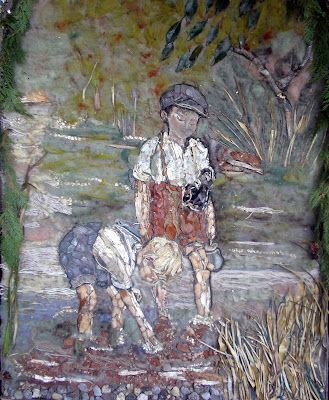 The well dressing tradition originates in Derbyshire but has been spreading to wells in other parts of the country, like this one, over the years. It dates back to the time of the Great Plague, and since the plague first arrived in this country through the harbour of the nearby town, it’s rather fitting.

And of course, like many old wells, this is a wishing well. You must stand with your back to the well with you feet on either side of the stream. Scoop up and handful of water and take a sip. The throw the rest over your shoulder back into the well and make your wish.

I’m not going to tell you what I wished for but you can probably guess.
Posted by Kate at 19:21 2 comments:

Michael is the author of “The Crime Writers Guide to Police Practice and Procedure,” which has just been published by Robert Hale Publishing. It is a ‘must have’ book for any budding crime writer and Michael has kindly agreed to stop by my Blog to answer some questions. Mike will also be happy to answer any questions you care to add in the comments below.


Tell us a bit about your book.
It is what it says on the cover! It’s a guide to police practice written I hope in non-technical language aimed specifically at crime writers – (although a lot of journalists/reporters would benefit from reading it even if only to get the rank structure right) – as a crime writer myself I think I can see what is of interest to other writers and can give them some guidance on what they need and don’t need to know, and maybe some ideas on roles that have not been used to best effect.

What motivated you to write this book?
I went to the Swanwick Writers school about three years ago and was asked to run a short workshop on crime. I enjoyed it and could do it without too much extra work on my part. It was very successful and I was asked to run a 4 hour workshop the next year. I had to do a lot of research for it – I looked around and found that there is a real dearth of books on this subject despite the fact that crime writing is probably one of the biggest genres so I put the idea of a book to three publishers, two turned it down and Robert Hale took it up.

Did you have to do much research on top of what you already knew from your police career?
I had to do a lot of research in two areas DNA and profiling. DNA had moved on a lot since I retired and I needed to get up to speed and of course you need to know a technical subject well if you want to describe it in non-technical language. I have just about enough science in my background to find this interesting rather than a bore, I can only hope that I have managed on the ‘non-technical interesting read’ bit. Researching profiling was fascinating as it is a much loved device now, especially with American writers, and of course by journalists. My interest was also fired by the fact that I was in Surrey Police when it was first used by the British police in the railway murders. Geographic profiling, trying to narrow the possible suspects by working out where he/she might live or work has some value but psychological profiling is just sophisticated guess-work with real dangers attached to its use. I had to be sure of my ground when writing this just because of the mythology that surrounds it.

Have the police procedures you describe changed much over the decades?
There are two ‘procedures’ to consider those for detection and those for prosecution.
Those for detection changed for the first time with the development of fingerprinting at the turn of the last century, then the growth of sophisticated forensics in the 70s and 80s then finally with the development of genetic fingerprinting in the 90s. The latter has revolutionised the treatment of crime scenes as the dangers of contamination are so great, such that for some crime scenes the Senior Investigating Officer may not get in for two or three days while the SOCOs do their work.

In prosecutions the first major change was the introduction of the Judges Rules and the police caution in 1910/11 then nothing much really changed until the Police and Criminal Evidence Act in 1984 followed by the introduction of the Crown Prosecution Service in the late 80s. The most recent changes have been the avalanche of anti-terrorism provisions which could take up a whole book themselves.

The other change worth mentioning is the culture of the service itself. When I joined in 1970 it was very male, white, conservative whereas there are now a lot more women in every rank and specialism and a growing (although still too small) number of people from the visible minority communities.

What do you think will change most in the future?
In the immediate future the service will be subject to the same pressures as the rest of the public services in have to cope with significant budget cuts – my own hope is that this leads to an appraisal of the use of Community Safety Officers a change that has never been evaluated and which now takes up a significant amount of forces’ budgets.

Longer term I think that there may be a backlash on the repressive legislation that has been introduced by the Labour government in the last ten years, I think we have seen the beginning in the way they have been forced to change their stance on retaining DNA and in the recent reaction to the fact that the Met used the powers under the terrorism acts to stop and search over 150,000 people, nearly a third of whom were of Asian or Afro-Caribbean origin. This cannot be right and is alienating the very communities whose active support we need to cope with the problem that Islamist terrorism presents

Your first love is fiction – is that where you will be concentrating your efforts next?
I have written two books neither of which could find a publisher’s editor who could ‘fall in love with’ them. I am now in the middle of a crime thriller based on a retired police officer living in the Greek Islands which I hope to finish this summer. If it works I may be able to fulfil my wish to emulate Hammond Innes who managed to finance his life sailing round there on the basis of his writing.

What is the best thing about being a writer?
Putting together a piece that you know instinctively hangs together and works – especially if it has dialogue that sound real and pacey.

And the worst?
Same as everyone else – the first blank page/screen where you know you want to write something but can’t seem to get the first sentence to emerge.

What piece of advice would you offer to anyone thinking of writing crime? (apart from buy your book of course)
KISS – keep it simple stupid! Don’t get too technical unless you really need to and are willing to do the research. One of my favourite writers in Ian Rankin and I think it is (apart from super plots and characterisation) because he never gets technical ( I don’t think Rebus ever actually arrests and cautions anyone) and because he has great cop dialogue which creates the right atmosphere.


Thank you Michael for answering my questions.
Posted by Kate at 20:00 10 comments:

One story – so many different tales.

There is always more than one way to tell the same story. Some of these will obviously work a lot better than others, and it is up to us, as writers, to work out the best way of telling the tales that we have bubbling around inside our heads.

So here’s an example of how the same story can be told in many different ways.

Just before Christmas our writing group carried out a little exercise that you might want to try yourselves.

We selected a well known fairy tale that we were all familiar with, in this case Snow White, and then we each selected a different genre out of a hat. We then had to rewrite Snow White in the style of the genre we had picked.

Well I picked out romance so mine was a slushy Mills and Boon style offering revolving around the love triangle between Prince Charming, Snow White and Grumpy, and yes, the Prince and Grumpy did get together in the end.

We had stories written as horror and chick lit, science fiction (the dwarves are aliens) and of course it worked particularly well as crime.

But my favourite was Jackie’s offering as erotica – my what a wicked, wicked queen!!
Posted by Kate at 09:20 No comments:

Another gorgeous day, and the valley before me is awash with yellow - fields and fields of oilseed rape smothering the landscape like a blanket - and ocean of yellow aglow in the sunlight, lapping at the base of the ridge.

Every year more and more fields seem to be planted with rape - more brilliant yellow to herald the coming of spring. 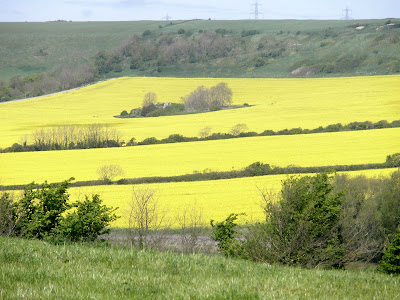 It's far too lovely a day to get much writing done. But perhaps I'll take some printouts into the garden in the hope of doing some editing. They are all coming together at the moment so I'm pleased with the progress I've made.
The WIP however has run into a small glitch - one of the minor characters has muzzled her way into the action. Don't you just hate it when they do that? She's been there for a couple of chapters now, but she's not contributing anything to the plot. Sorry Lucy. I'm afraid you've got to go.
Posted by Kate at 13:05 4 comments: