Last nights Prose Café at the Octagon Theatre in Yeovil was a talk by Bonnie Sartin of The Yetties, one of England’s most popular folk groups.

Now I have to admit that I’ve never really known much about this part of English culture before, so, for me, Bonnie’s talk was a real eye opener.

He told us about Henry and Robert Hammond, two brothers who cycled round Dorset at the end of the 19th Century recording the songs sung by the local people, and sang some examples for us which was superb. There was even a bit of audience participation!

So it was well worth braving last night’s Yeovil parking nightmare!!

I can safely say that I have completely changed my perception of folk music. Thank you Bonnie for a fascinating talk!
Posted by Kate at 09:09 No comments: Links to this post

Well, at last, my new writing website is ready for launch. I've tweaked with the layout and fretted over the content, changed the colour scheme again and again until I found one that I liked, not to mention going through several possible titles...

I've had a stack of fantastic help on this from fellow Litopian Emma Shortt - thank you Emma!

So, let me present:

The Weird World of Writing
Please take a good look around and if you have any comments or suggestions then please make them here. I hope you like it.
Oh, and what could this be?

A Buzz in the Forums

There have been a couple of very exciting developments over in Litopia over the past week and the whole forum is buzzing with it.

The first of these is the opening up of the Pitch Room. Here members who’ve done their time and put in the pre-requisite number of posts, can have the chance to pitch directly to agent Peter Cox.

But there’s more – they get feedback!! Yes, you read that correctly – FEEDBACK!! And what feedback it is – it comes in the form of a short video where he comments on their pitch and their writing and gives them constructive advice. I still can’t quite believe it.

And the other cause of excitement is the proposed Litopia e-zine. I’ve no idea how this is going to develop but I have the feeling it’s going to be good, Very Very good.
Posted by Kate at 19:09 1 comment: Links to this post

Wherever you were last night, despite freak hailstorms, floods and soggy bonfires I hope the festivities went well. We didn't make it down to the Ottery Tar Barrels last night although I hear it went well. But we took these pictures a couple of years ago, so here's what we might have been doing. 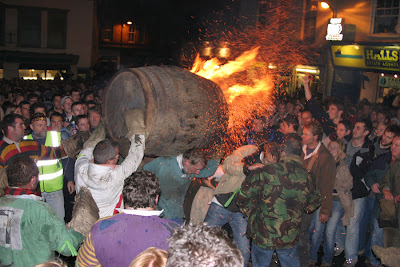 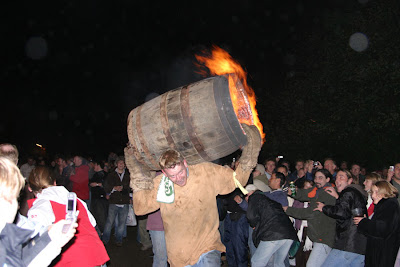