One of the main disadvantages for a writer of living in a remote corner of rural England, is the fact that the publishing industry tends to be very London orientated. As a result opportunities to network with agents and publishers are few and far between.

But one such opportunity did arise recently when the relatively new Skylark Literary Agency decided to venture out from the city and visit writers around the country. One of their visits on this tour was to the Storyslingers writers group in Shaftesbury.

I felt particularly honoured because the Storyslingers invited me along to give an author’s perspective on the industry, so I packed up my bag of books and hit the road north.

The drive to Shaftesbury is, for me, a long and winding one, not helped by the fact that Friday is changeover day and the roads are clogged with holidaymakers. Or that this particular Friday every tractor in Dorset seemed to be on the same road as me!

The venue for the talk was in Gold Hill museum, at the top of that pretty hill, immortalised by the Hovis advert of the 1970s. The Room we were in looked out across the fields and hills and the view was stunning.

Amber and Jo spoke to us about the agenting business, what they provide for their authors and what they are looking for in clients. The Q&A which followed covered all aspects from negotiation of contracts to the agent author relationship and the use of pen names.

It was a lovely evening, interesting and insightful, wonderful to see the Storyslingers again and to chat with Amber and Jo. So thank you to the Storyslingers for organising such a useful and informative event, and to Skylark for coming all that way to talk to us. It was really nice to meet Amber and Jo in person –it’s always good meeting an online acquaintance in the real world!

Here’s a picture of us at the top of Gold Hill. We’re standing on a slope though so I’m not as tall as I appear. 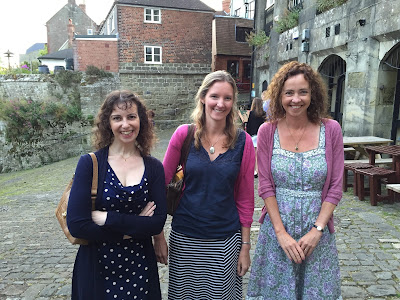 I’ve now launched two books into the world; my YA novel Red Rock which came out in September 2013 and, just the other week, my collection of short stories The Scribbling Sea Serpent, published by CFZ Publishing.

For both these books I organised a book launch – but the launches couldn’t have been more different.

For Red Rock I booked out my local village hall and invited people who I knew locally, or who I knew had an interest in the book – parents and teachers from my children’s school – a local book group etc.

For The Scribbling Sea Serpent I organised and online launch by setting up an event on Facebook.

Both events were successful in their own way but there were definitely things I could have done better. And so I thought I would share my ‘lessons learned’.

The first problem with the physical launch of Red Rock was working out how many books to have available. I discussed it with the bookseller who was supplying the books and running the stall and we reckoned that, with just over 100 people coming, roughly half to a third would buy books, and so we ordered 50.

We were wrong. What we hadn’t reckoned on were the multiple purchases people made. Often they wanted a copy for each of their children or grandchildren or nephews and nieces. It was September and people were already starting to think about Christmas presents. And of course the book group representatives were bulk buying too. The end result was that the books sold out in 40 minutes and the poor booksellers were subjected to an awful lot of grief!

So lesson 1 – make sure you have enough books!

Of course, with the online book launch this wasn’t an issue. The books were available from Amazon and all I had to do was provide a link. The paperback soon ran out but kindle downloads never do.

But that’s not to say the online launch wasn’t without its issues.

Yes the books were readily available at the click of a mouse and obviously since all the refreshments were virtual this cost me nothing and there were no glasses or crumbs to clear up afterwards.

But my first mistake was setting the event to private rather than public. Private appears to be the default and once I realised what I had done people had already been invited and accepted. When I tried to change it I found that Facebook doesn’t allow you to. The only thing I could have done was to delete it and start again. I was therefore reliant on guests inviting other guests since I couldn’t share the link to the event in any of my networks. As a result I didn’t get the reach outside my own network of contacts that I could have done.

So lesson 2 – when setting up a Facebook launch event make sure you set it to public rather than private.

Whereas my physical book launch only went on for a couple of hours the online launch was set to run much longer. I ran it from 9am to 6pm at which point I had to head off to the creative writing course I was running. Unfortunately since the book is available worldwide this meant that people in other time zones who were coming online as I was leaving missed out. I’m not sure what I could have done about this one. Maybe I could have co-hosted it. Or asked someone to cover for me when I was away from the computer.

So lesson 3 – plan the timings to run across as many time zones as possible so that potential overseas customers do not miss out.

The event itself went well. I had a series of interesting and relevant links to post throughout the day and a number of discussion topics to start. It was really interesting to hear how many of my friends have seen a ghost or spotted a phantom big cat! There was lots of participation and a visible boost in sales.

But is a Facebook event the best platform for an online launch? The main disadvantage was that once it was over it ceased to be visible, and so all those interesting conversations were lost.

So lesson 4 isn’t really a lesson but more like a question. What other platforms could I have used for an online launch party?
Posted by Kate at 08:58 No comments:

A Boagane and A Giveaway

My mother comes from a tiny village on the Isle of Man called Maughold (pronunciation Mack-uld). I grew up listening to the tales that she and my grandmother used to tell us – of the fairy folk and strange mythical creatures that prowled the cliffs and woodlands, the moorlands and the hills.

Over the years I’ve tried to track these legends down, but the names of these creatures are words I have only ever heard spoken and never seen written. And that is a problem with Manx words – how on Earth do I spell them to type them into google? Take Maughold for instance? See my point. (Okay, if you’re a Manx speaker it probably all makes sense. But in our family the language died with my Grandparents.)

However, at last I have managed to track one of these creatures down.

My Grandmother used to tell us about a horrible sprite that haunted the village with its screams – and this creature was called a Guv-Na-Scoot. A bit of imaginative googling later – and there it was! A Boagaine (or I believe more commonly Buggane) called a Gob-ny-Scuit.

Bugganes were demonic creatures said to be covered in black hair, with claws, tusks and a large red mouth. This particular one terrorized the inhabitants of Maughold with its terrible screeching when the wind blew in for a certain direction. However, a certain William Kinnish was determined to find the source of the periodic wailing that so worried his neighbours and did indeed  discover the source – a cleft in the cliff face that acted as an Aeolian harp when the wind blew in from a certain direction. And so the buggane was nothing more than a natural curiosity.

The cover art on my short story collection, The Scribbling Sea Serpent, relates to one of the stories inside called The Screechers. And the inspiration for this story was – yes, you’ve guessed it – the Gob-ny-Scuit.

And so on to the giveaway. I am offering up one signed copy of The Scribbling Sea Serpent and to enter please use the Rafflecopter form below.