The Journey to Publication

The wonderful How Publishing Really Works blog has just announced a new series of articles coming our way – stories of people’s routes to publication. This is going to be really interesting, I can tell.

As an aspiring author, published in short fiction but as yet unagented and without a book deal for any of my novels, I find these sorts of stories of hard work and determination wholly inspiring. It makes me feel if they can do it then so can I, if I just stick with it, work hard, improve my writing and come up with that killer idea!

So pop over there and take a look. The first will be posted tomorrow.
Posted by Kate at 18:43 No comments: 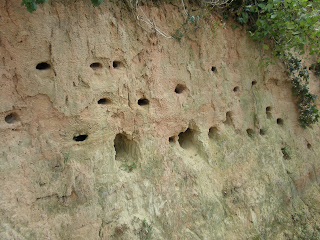 It is the equinox and summer is turning to autumn, berries in the hedgerows and falling leaves.

It’s a beautiful September this year, clear skies and sunshine. But the seasons are turning.
All summer this sandy bank was a bustle of sand martins, dashing back and forth, raising their young. The skies were filled with their cries, and their dropping splattered over any cars that foolishly parked too close.
But last week they left. Their nest holes lie empty. The skies are silent. Autumn is here.
Time for me to turn away from the fields and woods and get on with some writing…
Posted by Kate at 20:01 9 comments:

We used to have a hedge at the bottom of our garden – one of those messy old hedges with lots of gaps. But, getting a bit tired of regular garden invasions by the local livestock, we decided to remove it and put in something more substantial.

It was then that the children found the bones... 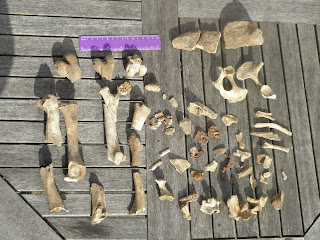 My first thought was that we’d found the remains of someone’s pet dog – and my husband was worried that they might be human!! But, having convinced him that they were definitely animal, the kids put them in a box and proudly marched them up to the local museum for identification.

We got them back at the weekend, along with the archaeologists report, and it looks like neither of us was right.

The bones belong mainly to young cattle with a few rabbit bones as well. Some have been cut or sawn suggesting that they were killed for human consumption. They are also likely to be well over a hundred years old – dating to the times before organised refuse collection, when people buried their waste in pits. The suggestion is that these bones are the remains of the meals of workers who were building the nearby railway in the 1850’s.

So there you go – our very own archaeological dig! I wonder what the kids will find next – a stash of gold coins would be nice!

Another couple of good reviews of Jupiter SF 25: Erinome have appeared – one over at the Sfsite which is very positive about Jupiter 25 in general and another, also good, over at SF Crowsnest. Here are a couple of extracts…

About the issue as a whole:

'Jupiter Magazine' allows the fiction to speak for itself and in this case we have five excellent stories to entertain the readers.'

'The Oracle' by Kate Kelly was a rather disturbing tale. Not the sort of thing you would want to read if you were claustrophobic!"