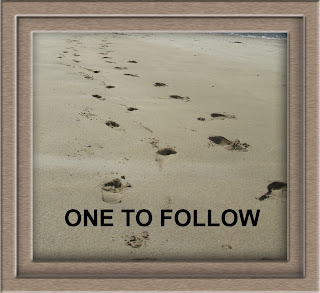 I turned away and when I looked back I noticed my followers had topped the 200 mark! Yay for followers!

So I'm going to run another followfest - a bit like the one I did when I reached the first 100, but this time I'd like you all to pass it on!

So here's the plan. I've created a little "One To Follow" award and I'm awarding it to ten other bloggers who I really think you ought to be following if you aren't already.

So head over to their blogs and if you like what you see then add yourself as a follower.

And to the bloggers themselves - please take the award and pass it on to ten more bloggers of your choice!

So here are my ten 'One To Follow' Fab Bloggers (tough call this one - there are so many great blogs out there, but I'll leave it to you to pass this on to the ones I've missed!)

Creepy Query Girl - I love this blog - it's seriously sassy and fun!
Adventures in Space - There's a really interesting series called "After the call" running over here - worth a look.
That Elusive Line - an author/illustrator with a book coming out in 2012
To Stalk a Publisher - A Romance author to watch - you'll be hearing more of Emma!
"Living with and Author" - by Brunella Labrador - I just love the whole dog thing that's going on here!
Ellie Garratt - a very lively blog with lots going on that I only stumbled on recently.
Scribble and Edit - another lively blog with lots going on!
The blogger formerly known as... - a real enigma, this one :-)
Spellmaking - a SF author with quite a few publications under his belt - and more to come I'll bet!
Desperately Writing Susan - This is a really new blogger - go on - give her a warm welcome to the bloggosphere!
Posted by Kate at 17:00 21 comments: Links to this post

I simply couldn’t resist this one – the temptation to indulge in pure Star Trek geekery (cheers Ellie) was too much – so here you go – my 5 favourite Star Trek Characters are:

Spock (okay, boring but I love his logical view of the world)

The Holographic Doctor in the Voyager series – for being the only character with any real depth amongst a crew of cardboard cutouts!

Jean Luc Pickard – for saying ‘Merde’ on the Bridge of the Enterprise! Shame on you Jean Luc - there’s children watching!

A tribble – no – several tribbles – Oh hang on a minute – lots of tribbles….

Anybody want a tribble?

They were making hay in the field behind my house and I paused to watch the tractor going back and forth, the bailer towing behind and the bales spitting out into piles. 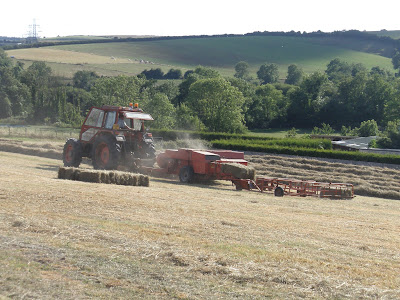 I watch the bailers every year with the same fascination, and each time I do I remember, many years ago, when there was magic.

We were kids, sitting in the sunshine by the edge of a cornfield, watching a bailer just like this one. And on one of his circuits the farmer stopped.

“You kids,” he said. “You can play with this stack if you want. But don’t go touching any of the others.”

We waited until he had gone.

Those bales became a fort, and a castle, a dungeon and at one point just an ordinary shop. We fought battles, held sieges and made daring rescues, chasing our enemies across the stubble in the summer sun.

Later the farmer came back with a trailer, loaded them up, and the magic was gone.
Posted by Kate at 09:00 6 comments: Links to this post

My daughter’s friend introduced her to these and the series turned out to be a huge hit. She’s read the whole lot and is hungry for more. So of course, I read the first one to see what this was all about.

Now as you have probably already gathered I am particularly fond of thrillers. I’ve enjoyed the James Patterson’s adult thrillers that I’ve read – including ‘When the Wind Blows’ which is the book in which the character of Max first appears – albeit in a somewhat different guise. So I was eager to see what his Young Adult fiction was like.

Well this is one rollercoaster of a ride. It hits the ground running and the pace picks up speed from there. There’s no let up – one thrill after another. Whereas in most books the pacing varies between fast and moderate this one varies between very fast and extremely fast. I was almost breathless reading it.

However the disadvantage of this is that there isn’t much room for character development and I never really empathised with Max. I didn’t feel that the other characters had much depth either.

But I don’t think that matters here. What kids relate to best with these characters is their alienation – after all – you can’t get much more alienated than being a mutant kid with wings. And for your average teenager this is going to be a big part of the appeal.

When the book ends it’s very obvious that the story isn’t over by a long stretch. The plot is left hanging. You feel like you’ve only read the first chapter, so it’s not surprising the daughter was champing at the bit to get onto the next one.

http://www.maximumride.co.uk/
Posted by Kate at 10:00 7 comments: Links to this post