My short story, Desiccation, which originally appeared in Jupiter SF, has just been published over at Sci Phi Journal. It’s a free read so do head over and take a look. I hope you enjoy it.

Review: Planet of the Red Dust by N Tolman Rudolph 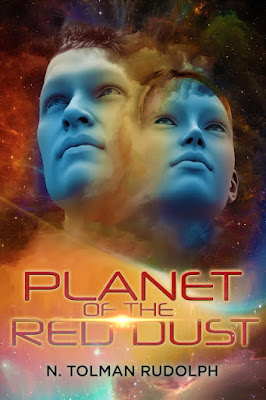 Planet of the Red Dust is a story of hope and survival on an alien world. The novel opens with Jared, sold survivor of the crashed Wayfarer, burying his dead colleagues on a planet which, by all indications, is devoid of life. So it comes a something of a shock when two humans appear nearby.

We quickly realise we are in the realm of the Lost Civilization genre (a genre I particularly love), but this is a civilisation lost in space. The surprisingly human nature of the denizens of this world is soon explained and their origin is unexpected and original. However, this in itself raised more questions and I eagerly anticipated answers which never came.

This was my one niggle with this tale. We discover the Who and the Where but never the How or the Why, and this left me a tad disappointed. I would also have loved to know more about the ancient technology to which we are introduced and although the people themselves may have forgotten how things work I would have expected Jared, as an astronaut, innovator and adventurer, to have more of an enquiring mind. He felt at times rather too accepting and not sufficiently questioning.

But that aside I enjoyed this tale very much. It is a gentle and ambling story of love and survival. I found the world building fascinating, both the planet and the solar system we are introduced to and the culture of the people who inhabit it. The environmental disaster that threatens this world felt very real and totally plausible. And of course, Jared has a key role to play in their survival. But to say any more would only be a spoiler.

So all in all an enjoyable and leisurely read that should appeal to all ages.

To find out more about the author visit her blog.

Available from:
Amazon US
Amazon UK