A Round up of Reviews

I’ve been catching up on a bit of Children’s and Young Adult reading recently. It’s a good idea to keep up with the genre in which you write and since I’m writing thrillers for a younger audience this is what I’ve been reading:

I am Number Four by Pittacus Lore
Teenager John moves from town to town, always on the run, always desperate to fit in. But he has a secret. Once there were nine, three are dead and he is next – he is number four.

Blood Ties by Sophie McKenzie
Theo and Rachel think they know who they are, but when Theo finds out that the father he thought was dead is in fact still alive they discover a truth about their identities that will change everything for ever.

Ice Shock by MG Harris
The second instalment in The Joshua Files - Josh’s search for the truth about his father’s death leads back to Mexico and to the discovery of a shocking secret.

So what did I think of them?

First of all I’d like to say that I enjoyed all three of these in different ways. They were all very readable, but not always that satisfying.

I am Number Four has had a huge amount of hype and yet I found it something of a disappointment. It was all just a bit too predictable, and too obviously setting up the rest of the series. Even so it hooked me in and kept me reading. Yes I enjoyed it but no, I won’t be rushing out to buy the next one.

Blood Ties and Ice shock on the other hand are a far more satisfying read. Both have sound central concepts, engaging characters and quality plotting.

Blood Ties reads very much as a stand alone, although I do see there is a sequel. I particularly like the way the author developed her characters, and how they overcame their respective vulnerabilities. It’s a cracking story that kept me on the edge of my seat.

Ice Shock is the second in a five book series and as a result the series arc is more developed. However this in no way detracts from the story at hand. I read the first book, Invisible City, a while ago, but I think this one is much better. The author left me satisfied and yet wanting more. Now there’s a skill I hope I manage to master one day. I’m pleased to see that books 3 and 4 are already out and the final one will come out next year. Off to the bookshop for me.

Does anyone have any other recommendations in this genre?
Posted by Kate at 09:00 10 comments: Links to this post

It’s the weekend and it’s raining. “Today,” I think, “I’ll get some writing done.”

I head downstairs. There’s a child attached to the computer. “I’m doing my homework. It has to be handed in tomorrow.”

A couple of hours later I look in. She’s on Facebook. Cue argument. I disconnect the internet. She goes back to work.

At last she finishes. I take my seat. I read the last couple of pages to get back into the flow. I write a sentence. A gentle purr and the cat jumps onto the desk. She pads about on the keyboard.

I push her off and delete everything she has written. Somehow she has managed to engage some weird function thing that I don’t understand. It takes me the next half hour to sort it out.

I re-open my file. I re-read what I read earlier. I write a sentence. My husband comes in. Phone call for me.

When I get back he’s sat at the computer. “I’ll just be half an hour.” I go and get on with something else.

“Is the computer free now?” I ask as he emerges.

He shakes his head. He’s just bought some something. It’s downloading. It’ll be another four hours.

Looks like I’m not going to get much writing done today.

Maybe tomorrow…
Posted by Kate at 09:00 7 comments: Links to this post

As writers we strive to avoid predictability.

There is nothing more satisfying for a reader than the unexpected turn of events – and yet, when you think back, the clues were all there.

Sometimes it's obvious right from the start where a story is going to go. You want to be surprised, but the writer fails to deliver.

Some writers have this down to a fine art. I'll talk a bit more about this in my next post when I will be reviewing some of the children's and YA books I've been reading recently. One of the writers does this extremely well.

In the meantime, if you haven’t already seen it check out the latest Dr Who episode for an excellent example. Wow! I can’t say any more than that --- Spoilers!

I really love it when something unexpected happens. Walking through the fields in the evening sunshine a few days ago we spotted something moving in the grass up ahead. I thought, perhaps a small dog. 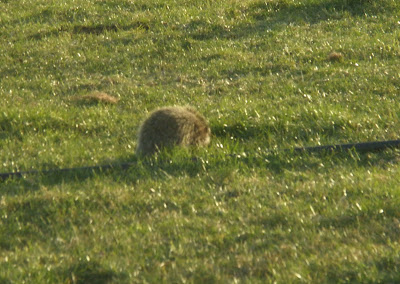 When we got closer it heard us and turned around…. 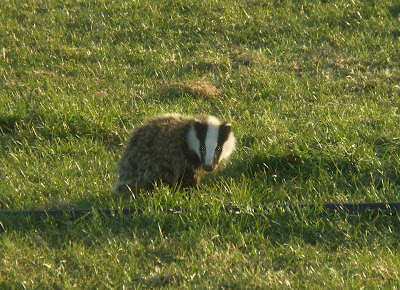 I never expected that!
Posted by Kate at 11:00 6 comments: Links to this post

Anything that can go wrong will go wrong.

I use this law all the time when I write. It doesn’t apply to me of course – it applies to my poor unfortunate main character.

Every time I put him into a new situation I think to myself: ‘What can possibly go wrong for him here?”

“Please, please,” he begs. “Can’t I have something go my way for once?”

But where would the fun be in that? Can you imagine what a boring story that would make?

“Sorry,” I reply as he clings to the rock face by his fingernails, the sea churning beneath him. “It would be far too easy to just let you climb out of here.”

His fingers slip. He falls…

There. Get yourself out of that one!
Posted by Kate at 08:00 11 comments: Links to this post