On Top of the World

This is an ancient landscape and if you look you will see the traces of past civilisations – from the tumuli that form grassy mounds along the skyline, to the roman roads that run straight and true and, often, are still used to day. 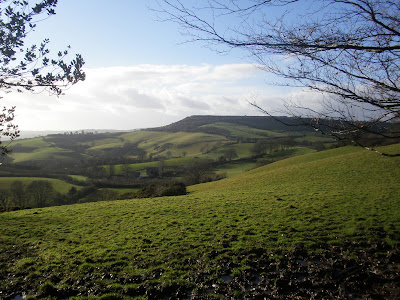 For a long time the flat topped hill you can see in the picture, Pilsdon Pen, was throught to be the highest point in Dorset. But a few years ago it was re-measured and its neighbour, Lewesdon hill, was found to be a couple of metres higher. It is from this second hill that the picture was taken.

But both are part of the ancient landscape of which I speak, for both were Iron Age settlements. This was an area on the border between two of the tribes of that ancient world, the Durotriges to the East and the Dumnonii to the West. What ancient battles did these ramparts see? What lives were lives out on these hills?

The fortifications are better defined on Pilsdon Pen, rampart and ditch, and I stood, on one of the few sunny days this winter, staring out at a landscape that stretched below me.  I thought of the people who stood here over millennia past, and looked at this same view, as the landscape changed from forest the field. Did they stand here and watch as the Romans came? Are they watching now?
Posted by Kate at 12:00 7 comments:

Sticking with the Martian theme I thought I'd share my top ten Martian tales. So there they are - in reverse order:

(10) The Martian Way by Isaac Azimov  - No SF list would be complete without Azimov, so here he is.

(9) Voyage by Stephen Baxter - an excellent alternate history where mankind is already out exploring space.

(8) The Outward Urge by John Wyndham - Not a writer normally associated with hard SF but this is an exception to the rule.

(7) Red Mars, Green Mars, Blue Mars by Kim Stanley Robinson - okay, so this is really three books, but they deserve a slot of their own - Martian terraforming in all its glory!

(6) We can remember it for you Wholesale by Philip K Dick,  which you probably know as the film Total Recall - the first one that is - the latest one isn't set on Mars, which I think spoils it.

(5) Captain Scarlett and the Mysterons - I just had to include this - well, just - because :-)

(4) The Sirens of Titan by Kurt Vonnegut - because he's one of my all time favourite writers!

(3) Stranger in a Strange Land by Robert A Heinlein - an all time classic in my opinion - that stayed with me long after I'd finished the last page!

(2) War of the Worlds by HG Wells - The original Martians and probably the best!! (And I have to mention here the Jeff Wade album by the same name which I love)

(1) The Martian Chronicles by Ray Bradbury - Both the book and the TV series - I loved these stories! Really original Martians too.