Tales of the Damned 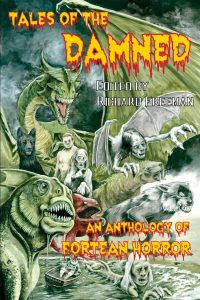 I have just received my contributor’s copy of the latest book to hit the shelves from CFZ Publishing’s Fortean Fiction imprint – Tales of the Damned: An anthology of Fortean ** Horror.

The collection contains 25 stories from 21 different authors, some of whom are well known names in the field of Fortean and Paranormal research. This adds a really interesting dimension to some of the stories included.

To quote the editor, Richard Freeman: “Who better to pen a collection of weird tales than those who hunt monsters, search for ghosts and study anomalous phenomena?”

I myself may not be a monster hunter and I incline towards the sceptical, but you cannot deny that there are things in this world that might at first appear inexplicable. Often the explanation for something seemingly anomalous turns out to be quite mundane, but this itself is intriguing. The whole subject is a fascinating one. Imaginations are set alight and stories like those in this collection are the result.

If you want to know a bit more about Forteana then do check out fellow contributor Andrew May’s fascinating blog on the subject. In the meantime I have a few stories to read!

Tales of the Damned is available in paperback from Amazon UK and Amazon US and the kindle version will be issued in a few weeks.

** The term ‘Fortean” refers to the works of Charles Hoy Fort (August 6, 1874 - May 3, 1932). Fort was an American writer and researcher into strange phenomena. You can find out more about him here.

Posted by Kate at 09:30 No comments: Links to this post