Interview at The Mystery of Writing

Today I have been interviewed over at The Mystery of Writing. This is through the International Thriller Writers which I signed up for about a month ago. I should really have done so sooner. They feature all new releases in their magazine The Big Thrill which has a huge reach. They also conduct author interviews such as this one. So if you are writing thrillers or suspense and have a publishing deal do check them out! It costs nothing to join but the benefits are huge.

Anyway. Here is my interview: The Mystery of Writing

The Sleepers - Publication Day is here!

Today is launch day - The Sleepers is out in the world and has already been gathering some great reviews. It is still only 99p so grab yourself a copy before the price goes up!

As you can probably tell I've been having a lot of fun playing around in Canva to create some promotional graphics. This one tells you a bit more about what you can expect to find within those pages!

And now - off to celebrate with some bubbly! It's never too early - not on launch day! 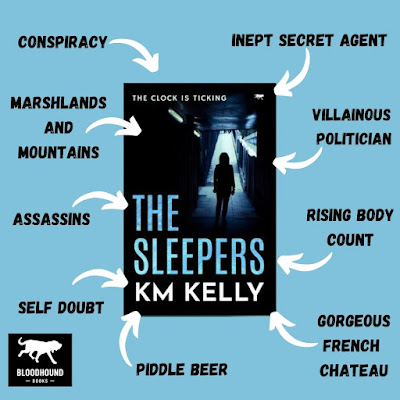 I'm delighted to be able to share the cover for The Sleepers and the pre-order links: 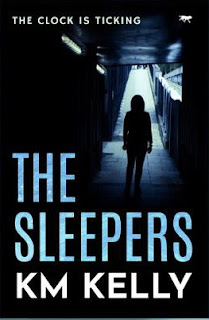 A time bomb is ticking—but what if that time bomb is you? A chilling novel of intrigue, terror, and one man and woman in a race against the clock . . .

Sylvie is running. Running from the memories of a terror attack in London she experienced as a child, an catastrophic event in which her brother died. Running from her abusive boyfriend. And running from a warning, given to her on a station platform in Nantes: Someone is trying to kill her.

Corran isn’t really Corran. He’s working deep undercover to infiltrate the political organisation that looks set to win the upcoming British election—a group that doesn’t appear to have existed a few years ago. Corran has been sent to find out who’s behind them and what their true agenda might be.

But he messes up. All he has is a list of names, Sylvie’s included. Only with time does he begin to see the connections. Are those on the list, who were caught up in the London terror attack ten years ago, now being systematically taken out? The hit list will force Corran and Sylvie into a reluctant partnership, and into the center of a looming threat that could explode at any moment . . .

Not long now until The Sleepers is let loose upon the world. Not long to go until I can share the cover with you. Not long until the 26th April - launch day! 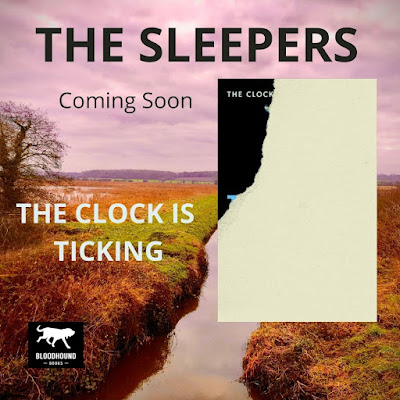 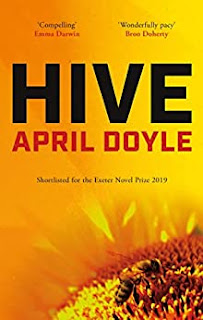 Near-future Britain. Climate change has led to food shortages and civil unrest. Pollinating insects are in steep decline. Commercial bee farmer Victor Martin travels around the farms of Kent with his hives to pollinate fruit trees and crops. Local research entomologist Dr Annie Abrams is devastated when she’s ordered to give up her captive bee colonies – her life’s work – to join forces with Victor and ensure a harvest. But the bees are dying. Their only hope seems to be an experimental alternative to insect pollination: robot pollinators called nanodrones. But why does the drone designer seem so familiar? And who is behind the shadowy organisation intent on sabotaging their vital work? Can Annie and Victor win their battle to save the bees… or is it too late?

Hive is and excellent book, and an important one. It is an excellent story, well crafted and beautifully written, with well rounded and empathic characters. I really felt I could relate to Annie, but all the other people populating this desperate vision of the future are equally engaging.

This is a book with an important message, and yet, it doesn’t come across as messagey at all. The power of the story dominates. Hive is very well researched and informative, but also you can sense the author’s passion for the countryside and nature. It’s a delight to read something so well attuned to the world around us.

Five stars from me.

Review : The Prisoner of Paradise by Rob Samborn 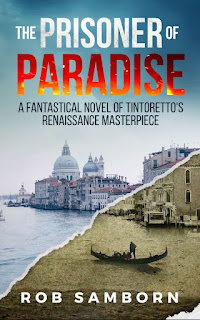 Medieval and modern Venice collide in ways you simply wouldn’t expect. I’ll never view a Tintoretto in quite the same way again!

On a trip to Venice, Italy, an American comes to believe that his true soul mate is not his wife, but a woman whose soul has been trapped in a Renaissance painting for 450 years--along with thousands of others. Teetering on the brink of insanity and navigating present-day and Renaissance Venice, he discovers a secret society that taps an ancient power to extract and imprison souls for eternity. He'll do anything to free his love, but freeing her means freeing all the souls--which the secret society will never allow.

The Prisoner of Paradise is at once a heart pounding adventure and a heart wrenching love story. Set in Venice and moving between the past and present we are immersed in a dual world. In the present we can taste and smell Venice as if we are there with all the tourists, and with Nick. And then there are Nick’s memories of a past life in 16th century Venice and his love for Isabella. Another Venice which the author deftly brings to life, and feels as real as the modern Venice we know so well. This is a novel with a powerful sense of place and characters I did not want to leave. It is a novel that continued to resonate long after I had turned the last page.

But if I thought that Prisoner of Paradise was s good then the second book in the series, The Painter of Paradise, was even better. So many unexpected turns and twists that I simply didn’t see coming. And they kept coming, right up to the thrilling finale.

I was fortunate to receive an ARC for this. There’s going to be a third book but I’m going to have to wait. Agh!! The torment! I feel like one of those souls – trapped in the painting.

This has to be one of the most original concepts I’ve ever come across, and, combined with skilled storytelling and compelling characters, as well as the author’s clear love of Italy and of art, this is a series that has huge appeal, and is really something rather special. It would make an amazing film or miniseries. Any producers reading this – take note!

I can’t recommend it highly enough. Now to plan a trip to Italy to go and look at some art….

In addition to being a novelist, Rob Samborn is a screenwriter, entrepreneur and avid traveller. He’s been to forty countries, lived in five of them (including Italy) and studied nine languages. As a restless spirit who can’t remember the last time he was bored, Rob is on a quest to explore the intricacies of our world and try his hand at a multitude of crafts; he’s also an accomplished artist and musician. Born and raised in New York, he lived in Los Angeles for twenty years, and he now makes his home in Denver with his wife, daughter and dog.

As publication day for The Sleepers draws closer I've been looking at ways I can increase my profile and get my name out there. And one of the things I have done is to join this group - the 22Debuts. This is a large group of authors who are debuting in 2022, and as The Sleepers will be my first adult thriller, I qualify.

It's been great to network with other authors across the world, and in my chosen new genre. But I'm also discovering some really exciting books that I cant wait to read!

Do check out their website and see for yourself!!

K M Kelly
Welcome to my blog. I am a UK based author with a passion for the sea. My debut thriller, The Sleepers, will be published in April 2022 by Bloodhound Books.

Show 10 Show All
All photographs and content on this blog are (c) Kate Kelly unless otherwise stated. If you wish to reproduce any please let me know and link back to this blog.