The Wreck of the Minx 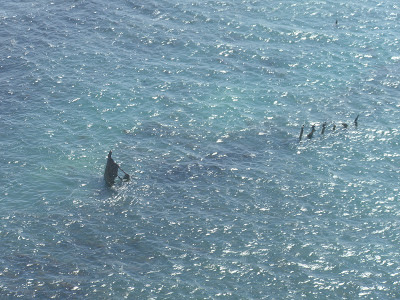 The coastline round here is steeped in history. The rocks that form the rugged cliffs and offshore ledges tell of a world of giant sea monsters and primordial forests. There are machine gun batteries and pillboxes that tell of a time of fear and war, and there are shipwrecks.

There are shipwrecks all round this coast, each telling a tale of tragedy and bravery, or looting and murder. Many of the wrecks are hidden beneath the waves, their only visitors fish and scuba divers. But some can still be seen.

Here on Frenchman’s Ledge lies what remains of the Minx, a coal barge who broke her moorings and drifted, un-crewed across the bay. That was in 1927, and now all that remains of her steel hull are a few ribs and a fragment of her bow.

And as for her cargo – I believe there were warm hearths in the local cottages that winter.

Email ThisBlogThis!Share to TwitterShare to FacebookShare to Pinterest
Labels: the sea, weather, weird

The 'Next Big Thing' Blog Hop

I was tagged to be a part of this meme by Thomas Taylor, whose own version appeared last Wednesday. (It’s a Wednesday thing.) It’s an opportunity to talk about a work in progress so I'm going to tell you a bit about my debut novel Red Rock which is going to be published in 2013.

What is the title of your next book?

Where did the idea come from for the book?

Many years ago one of the Mars Orbiters sent back an image of a mysterious white rock on the Martian surface. I started to wonder - what could it be....?

What genre does your book fall under?

What actors would you choose to play the part of your characters in a movie rendition?

Someone nobody has heard of but is going to be huge!

What is the one sentence synopsis of your book?

The world is changing. The ice is melting. But as the icecaps retreat secrets are revealed, ancient ruins that have remained hidden for a hundred thousand years. A civilisation that wasn’t human…

Will your book be self-published or represented by an agency?

I am represented by Julia Churchill of Greenhouse Literary and Red Rock will be published in 2013 by Curious Fox.

How long did it take you to write the first draft of the manuscript?

About 9 months, but I'd been thinking about it for a lot longer.

What other books would you compare this story to within your genre?

Who or what inspired you to write this book?

My father is the person who inspired me to write.

What else about your book might pique the reader’s interest?

And in turn I tag:

Words for the Wounded

It's Armistice Day, and I hope you will all pause and spare a thought for the brave men and women who have given their lives in conflicts past and present, and who will in the future.

But we must not forget the living and those who have been wounded in conflict and whose lives have been changed.

I would therefore like to bring to your attention to this new charity, Words for the Wounded, being launched today. a charity that raises money via writing prizes and donations for the rehabilitation of our wounded servicemen and women. Please give them your support, whether you are a writer or not. 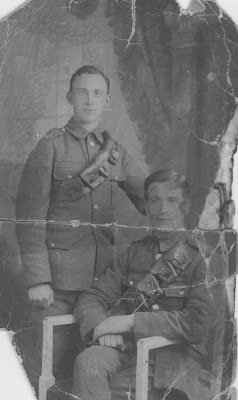 The soldier standing here is Sam. He was wounded in a gas attack in France in 1916, but was one of the lucky ones who survived. I have the postcards  he sent home to his sweetheart, Emma, from the trenches. They have often been censored and all begin with the words "I'm in the pink, merry and bright..."
Posted by Kate at 10:50 1 comment: