We wandered through the village towards the Abbey ruins and pushed open an iron gate to take another path; through the cemetery, past the gravestones. Here, down a cobbled track, in a dell surrounded by a grove of lime trees, was the sacred well.

Springs and wells have been revered by people for thousands of years and standing here in the Easter sunshine surrounded by birdsong and daffodils and listening to the tranquil sounds of the running water pouring out from the Earth, I knew I was standing somewhere special. For this is St Augustine’s Well in Cerne Abbas. It was once part of the Abbey and previously had a shine built on top of it, but that has been stripped away and all that remains now are the stone channels through which the water flows. 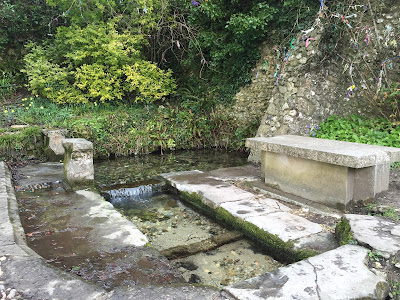 One strange thing about this well are the ribbons which festoon the surrounding trees. I am aware that in some places people dip rags into healing waters and then tie them to nearby trees as healing prayers. Indeed, this well does come with its own batch of folklore attesting to the healing properties of these waters, but I’m not aware of this being a local tradition, and many are ribbons rather than rags. 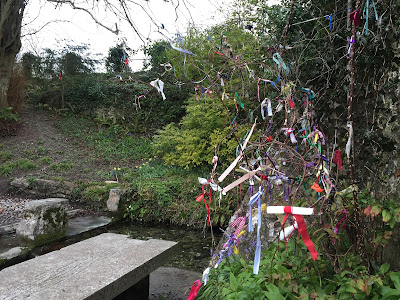 And so I’m curious. Why do people do this? Is it a healing ritual, are people tying their prayers to the trees, or is it simply a memento of their visit, a bit like graffiti? There are also a fair few ribbons tied to the trees around the abbey ruins, and that makes me think that it might be the latter.

(A bit more information about this well can be found on the Dark Dorset Website.)
Posted by Kate at 10:00 No comments: Links to this post

It’s too easy to get into a writing rut – to stay in your comfort zone. But sometimes you need to step out of that zone, to push the boundaries and to try something new.

That is what I am doing.

When I started out I wrote mainly Science Fiction and Weird fiction short stories, and achieved modest success, placing them in anthologies and magazines. It was satisfying and rewarding. I could have settled into that rut and stayed there. But I didn’t. I wanted to write novels, and so I tried my hand at writing for a younger audience.

The culmination of this venture was RED ROCK, my YA Cli-Fi thriller. And for a while I felt I’d found my niche. But RED ROCK hasn’t sold particularly well – at least not by publisher standards – (they expect sales of around 10K for a book to be considered a success) – and the subsequent MG and YA novels that I have written have all been politely declined.

I know in my heart that they’re better books, but this is a business. Publishers are looking for something shiny and new, and by that I mean debuts. What nobody tells you is that once you’ve had one book deal it becomes so much harder to get another, especially if your sales aren’t huge. There are no second chances in this game.

I’m not prepared to accept that. I do have an idea for another kids’ book, but I’m not going to write it. Not just yet.

I’m stepping out of my comfort zone and writing something new. Something different. And I’m not just talking about switching genres – (adult psychological thriller) – I’m talking about voice.

I’ve been experimenting with different points of view, mixing the first, second and third person, the present and past tense. Each can be approached in a different way, and the more things I try the more I start to see what works and what doesn’t. It’s fun being experimental, and I’m accumulating a number of interesting flash pieces that I may well post on this blog at some time in the future, to illustrate a few of the techniques I’ve been trying out.

Posted by Kate at 17:47 No comments: Links to this post