I wrote about a flooded world. I imagined the rising seas. I also envisioned high rainfall and flooded river valleys. But this wasn’t meant to be today. My book is set in the future – a future beset by climate change – a Cli_Fi story where flooding is the norm.
I talked to my readers at signings and talks about the areas most at risk. I talked about the fenlands around Cambridge where some of the action in Red Rock is set – a future flooded Cambridge of tidal mudflats and buildings that become as islands. I also talked about another wetland region, closer to my home – the Somerset Levels - about the island that Glastonbury could once again become.
But for those poor people who inhabit that region all my talk of floods could well be hitting a bit of a raw nerve. For weeks now many roads have been impassable, whole communities cut off. A “major incident” has been declared. For the people who live there – this is no fantasy. This is very real, and very unwelcome. 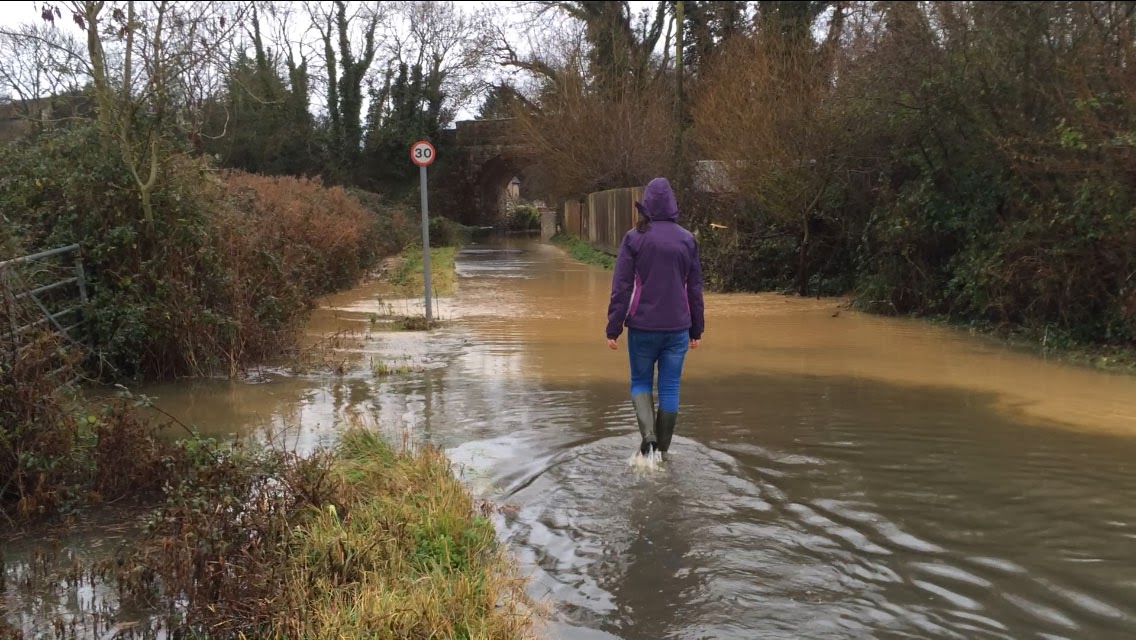 ﻿
I walked down the lane that led to through the village where I live not long after the rain had stopped – a brief window before the next front moved in. The fields were seeping, ditches overflowing, water streaming across the road.

Further on water was bubbling up through the drains, or from newly formed cracks in the tarmac – too much groundwater for the earth to hold, and the road and the river were indistinguishable. The fields to either side had become lakes, a welcome find for a flock of geese and a few ducks.

Soon we were wading, too deep for out wellingtons, and we turned back to higher ground.

Is what we are seeing the first indications of an overall trend towards more rainfall and more extreme weather, or is it just part of a natural cycle? Only time will tell.

The Ghosts of Forgotten Roads 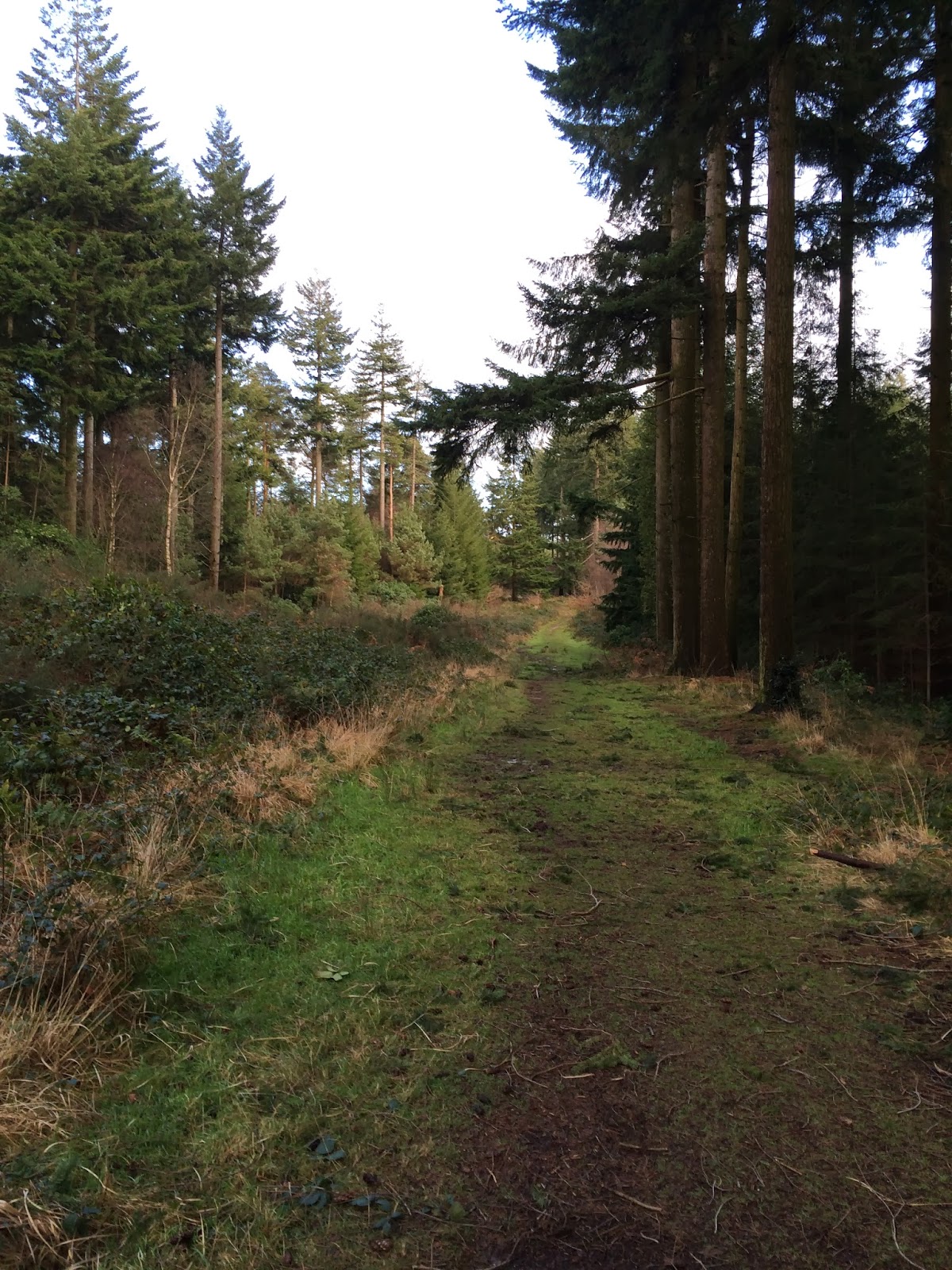 There’s something fascinating about ancient forgotten roads. They crisscross our countryside. So often we pass along them and do not see them for what they really are.

This looks like any other path through the forest but if you take notice you’ll see it is so much more – the width - the ditches to either side – the way it is ever so slightly raised above the surrounding heath. And then of course, its straightness – the final clue that betrays its true origin – a Roman Road.

For the best part of two thousand years people have trodden this path. First the Roman legions heading west, seeking out Cornish tin. Now the only people I meet are hikers and dog walkers. But we all tread the same road.

They say, if you come here late on a summer’s eve, as the shadows lengthen and the nightjars start to call, that Roman legionnaires have been seen marching through the dusk, the sound of Roman footsteps, the clank of armour and weapons.

Do all those people who once walked this road walk here still?

Only the forest knows.
Posted by Kate at 19:24 2 comments: Links to this post

Words for the Wounded

Today I am guest blogger over at the Words for the Wounded Blog talking about my journey into children’s fiction and listing my top tips for writing for kids. Do pop over and take a look.

Words for the Wounded Blog

Words for the Wounded is a charity which raises money via a writing prize and donations for the rehabilitation of injured service men and women. The prize is currently open to entries. You can find out more about it and how to enter on their website.

Words for the Wounded
Posted by Kate at 19:49 No comments: Links to this post 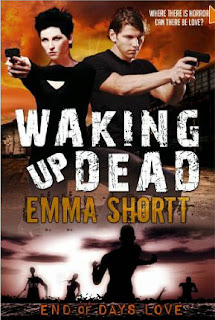 You know your life has hit rock bottom when you’re living off cooked rats and showering once every few months—if you’re lucky. But for Jackson Hart things are about to get a whole lot worse. When her best friend, Tye, disappears hunting for food, kick-ass Jackson’s ‘head south to safety’ plan looks like it’s dead before it’s even begun. But then she meets ex-mechanic Luke Granger, who takes her to his bunker, feeds her with non-rat based food, and offers her protection against the zombie hordes—not that she needs it. She knows how to use a machete and isn’t afraid to.

Jackson might have been tempted to stay in the city with her rescuer. Food, shampoo and the possibility of finally getting laid, what more could she ask for? But the flesh eaters are getting smarter and when the bunker is compromised, Jackson and Luke have no choice but to make the journey south.

Luke and Jackson team up to find other humans in a road-trip romance for the ages. Travelling for thousands of miles with zombies shadowing their every move they must utilize every resource at their disposal…and then some. On the way, they discover that even if flesh eating zombies are knocking down their door, there’s always time for sex and maybe even for love. (from Goodreads)

Part road trip, part zombie bloodbath, part love story – Waking Up dead by Emma Shortt ticks all the boxes. This is a cracking good read – and not at all what I was expecting.

In the first few chapters we meet Luke, hiding out from the zombies in an underground bunker, and Jackson, savage and fearless, fighting zombies in the streets just to stay alive. But this isn’t just another tale of the zombie apocalypse – this is a book that is so much more.

And then there are Jackson and Luke. The romance in this story is pitched just right, and their growing relationship drawn with sensitivity. But it is the characters in this story that I feel are its main strength – these people are traumatised and damaged – well who wouldn’t be – they’ve managed to survive a zombie apocalypse! But I do feel that this kind of character development tends to be overlooked in this genre and the author is to be applauded for handling it so well. It is this that makes the characters so well rounded, it makes them real and gives you real empathy with them.

Not to mention the unexpected twists and turns the story takes, but I’m not going to give away any spoilers here.

So all in all a very satisfying read, and if you like your characters savvy and your zombies gruesome then this is the book for you!
Posted by Kate at 10:00 3 comments: Links to this post

2014 was ushered in with wild seas and stormy skies. I watched the waves crashing onto the rocks on New Year’s Day, the wind in my hair and salt spray on my lips as the horizontal rain plastered my jeans to my legs. It was exhilarating. It was wild. And I felt the promise of adventures to come. The stories I have yet to write. 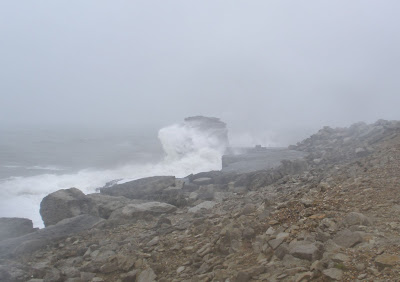 The coastline and sea around here are full of stories – tales of shipwrecks and smugglers. You can visit the caves where the contraband was stashed, or dive on those wrecks. Each tells a story, a tale of bravery, or the tragic loss of life. The sea can be cruel, and those who earn their living from it know the dangers all too well.
Looking at those churning waters, watching the waves smash against the rocks, feeling the blast of the wind and covering my ears against the blare of the foghorn, I could fully appreciate the raw power of the weather. I rounded the edge of the lighthouse, exposing myself to the full force of a gale that threatened to blow me off my feet. The past few weeks seem to be and endless run of storms sweeping in one after the other, brief windows of thin sunshine in between. Another is due in tonight, then another.
Every time I walk down to the shore the sea is different, her mood changes in an instant, and there is a timelessness about her. I love to stand and watch the waves and soak up the mood, and then return to my writing desk, refreshed.
But this particular day I didn’t hang about, but hastened indoors for a mug of hot coffee and a dense slice of fruitcake, and a warm fire to help me forget the storm raging outside.
Posted by Kate at 16:46 2 comments: Links to this post