There was a time when Giants roamed this earth. For the people of those ancient times they were a common sight, striding across the landscape. And then they disappeared, lingering only in legend and myth.

So what became of them?

Let me tell you.

The Giants angered the great wizards of the north. It is one thing when they grind the bones of ordinary men for their tea, but when one went a bit too far and fed the noble wizard of Ardsheal to his family, the rest of the wizards rose against them. They held a great council on the plateau mountain and cursed the giants for all time.

Across the world, in an instant all the giants were turned to stone – wherever they were walking, whatever they were doing, in a moment they were gone.

But if you look closely you can sometimes see them, for they form part of the landscape beneath our feet, entombed in the rocks of our hills and cliffs.

And here, as proof, is one of them. If you stand at the right angle you can see his profile in the cliff. 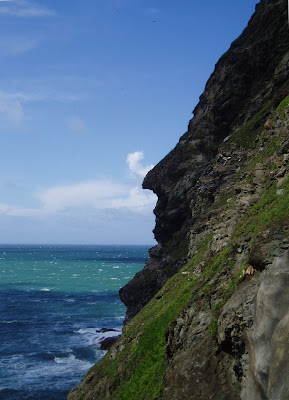 Some say this is the face of Merlin, or Arthur himself. But you and I know different.
Posted by Kate at 19:31