In the Footsteps of Vikings

Sometimes a throwaway comment is all it takes. A chance word and from nowhere a new idea springs into life. 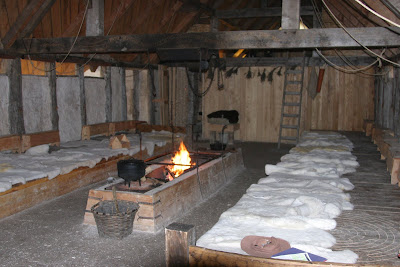 This time it happened as we sat round the fire in this Viking Longhouse chatting, while the kids were outside ploughing the fields (I'm not making this up - they were - but as there weren't any oxen they had to pull the iron age plough themselves)

A casual comment from one of the archaeologists and a whole new dimension to my WIP sprang into my head.

I've been trying to work out how to fit it into the story, except I can't. It wouldn't work. The plot doesn't need anything so major.

But then I realised that it would make a fantastic sequel, notching up the tension and the stakes tenfold.

I've never done this before - I normally put everything into the story I'm working on. But this case is different. I'm barely 10K words into DF and already I'm planning a sequel!

And for anyone who is wondering this Viking Longhouse is at the Cranbourne Ancient Technology Centre.
Posted by Kate at 12:07

Email ThisBlogThis!Share to TwitterShare to FacebookShare to Pinterest
Labels: DF