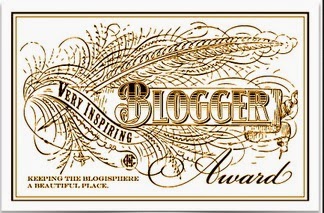 I’ve been nominated for the very Inspiring Blog award by Emma Haughton, a young adult author whose debut “Now You See Me” has just hit the shelves!

I do love awards, even though I don’t get them very often, and this one also involves me telling you seven things you didn’t know about me.

2.    I once played cricket on an ice floe in the Greenland Sea.

3.    I have a dalek on my desk at work. If I switch it on it wanders around shouting ‘Exterminate’ but I don’t switch it on very often as it annoys my office mates.

5.    My favourite flower is sea thrift

6.    When I was a student I had a summer job working as a sewage sifter – and yes, it was as disgusting as it sounds. We were part of a team carrying out a survey of the mudflats surrounding a sewage outfall in the Tay Estuary.

7.    According to my grandmother I am a direct descendant of MacIain of Glencoe. I’ve not been able to verify this and I don’t really want to because it’s much more fun to think that it could be true rather than find out it isn’t.

Now I’m supposed to be nominating some other authors for this award, but I think that anyone who stops by and reads my blog deserves an award for that alone, so if you’ve read this far consider yourself nominated.