The Once and Future Island 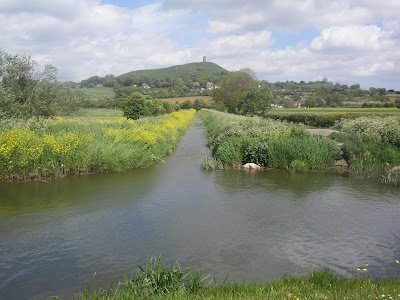 I stood, looking up at Glastonbury Tor from the Somerset levels. This flat coastal plain has been drained since the Middle Ages – a patchwork of water meadows and drainage canals, which, before, was a fenland landscape of reed swamp and willow.

Glastonbury itself has been inhabited since the iron age, and the tor is believed by many to be the Isle of Avalon of Arthurian legend, rising from the wetlands in the days before the fenlands were drained.

But being so low lying these meadows are vulnerable to flood. The whole region is only slightly above sea level and, in the past, frequently flooded during high tides. Sea defences, built in the early 20th Century have stopped these floods – but for how long? How much will the sea level have to rise before these defences are breached? I fear it may not need much.

3000 people drowned during the flood of January 1607. Farmland was destroyed and livestock swept away. In the world of Red Rock this whole region would be under several metres of water, and Glastonbury Tor would once more be an island.
Posted by Kate at 08:00