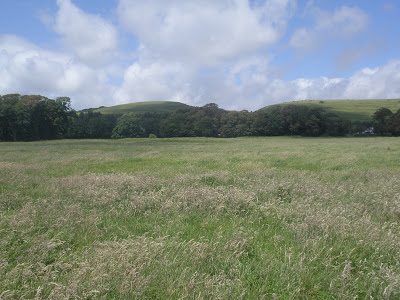 “That’s the Medieval Village of West Ringstead,” said the man as I passed. He was standing in the long grass beside the footpath staring out across a field, wild white hair and sun bronzed skin. “It was destroyed by the plague in the 14th Century.”
My husband gave him and odd look and hurried on past, but I paused and looked in the direction that he was pointing. The field was a wide grassy meadow and over on the far side I could see a series of humps and bumps. I’d never noticed them before.
“If you stand on them you can see the layout of the village, the streets, the houses,” the man continued. “But there’s a fence here now.” He prodded the barbed wire with the tip of one finger.
There was something forlorn about those grassy mounds, and I couldn’t help wondering about the people who lived there, and how they must have felt as the plague took hold.

When I got home I tried to find out a bit more about this village. I found it is mentioned in the Doomsday Book. I also found another explanation for what happened to it – a rumor that the village was destroyed by French pirates, who kidnapped all the women and children and took them away. J

Which explanation do you prefer?